On March 20, longtime Peace & Freedom Party member and valued comrade Al Rojas passed away at the age of 82 years old. We mark his passing here with remembrances from The Organizer newspaper, the Sacramento Poor People’s Campaign, and the AFL-CIO; all are reprinted with permission.

Below these tributes runs the text of his talk given at the Binational Conference Against NAFTA 2.0, the Wall of Shame and Deportations in December 2017. And click here for Al’s last piece for the Peace & Freedom Party website, an essay on the boycotting of Driscoll’s.

Al Rojas, Fighter for Workers’ Rights Until His Last Breath 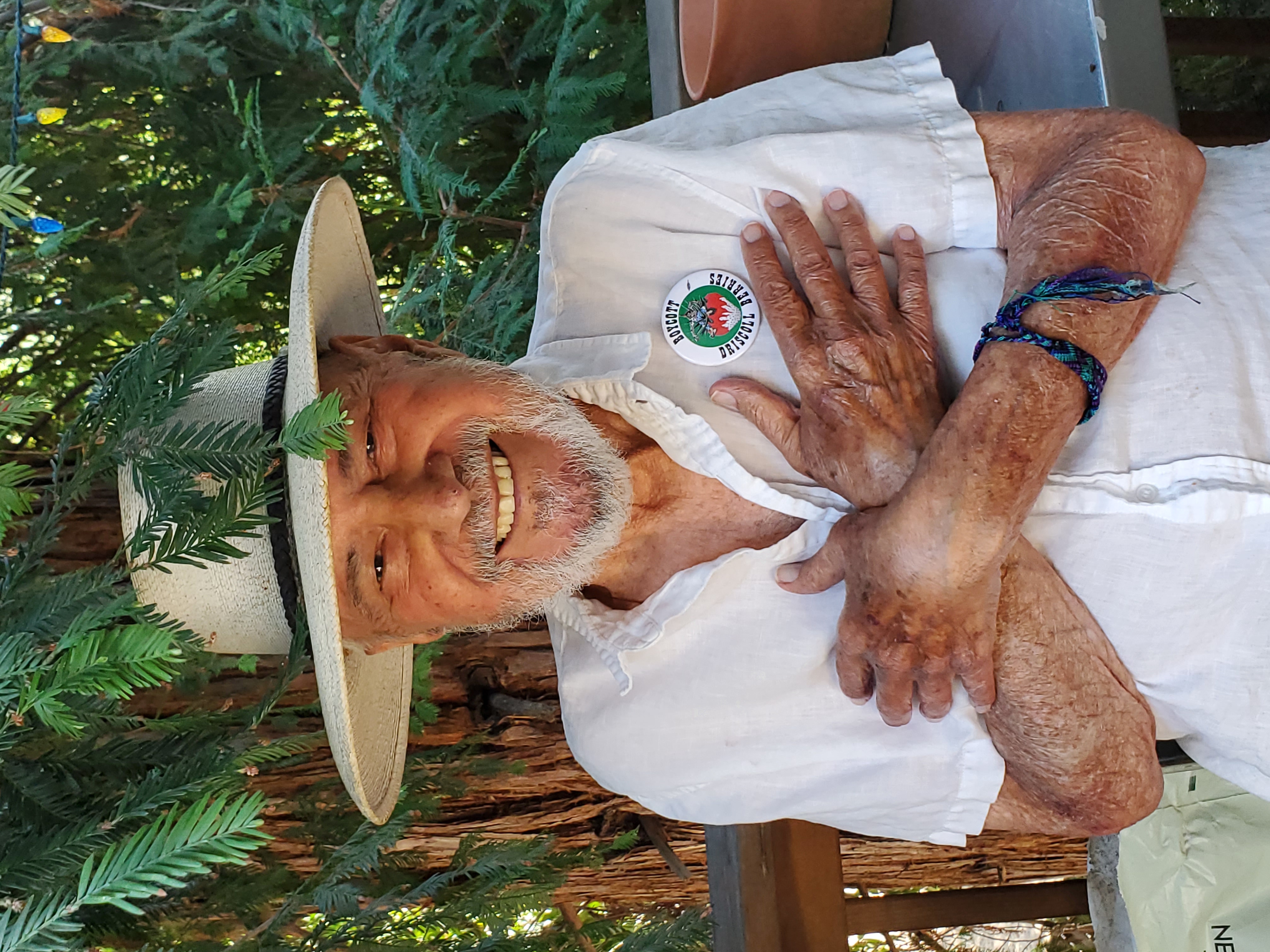 A statement by Socialist Organizer

Our friend and comrade Al Rojas — a tireless fighter for the rights of workers and all the oppressed — passed away on March 20 at the age of 82. In the letter sent to Mexican President Andrés Manuel López Obrador [see below], the Rojas family recounts many salient features of the life of Al Rojas, underscoring why he was a “giant” in their eyes. He was a “giant” in our eyes, too.

Though he was a co-founder of the United Farm Workers (UFW) union in 1966, together with Cesar Chávez, Al never received the accolades or recognition that Chávez received. And there was a reason: Al spoke his mind at all times, refusing top-down directives that would hinder rank-and-file empowerment, organizing, and independence in relation to the twin parties of capitalism, the Democrats and Republicans. Al eventually was shunned and cast aside because he would not accept the UFW’s subordination to the Democratic Party. In all the glowing tributes, from full-length movies to California state holidays honoring Cesar Chávez, Al Rojas was air-brushed out of the picture and official UFW history.

This did not deter Al one bit. He kept organizing farmworkers, “guest-workers,” undocumented immigrants, youth, public-sector workers — and he always linked the struggle for workers’ rights in the fields and workplaces all over the United States to the fight across the border against the NAFTA and CAFTA “free trade” agreements [see article by Al Rojas below]. Al understood deeply that the capitalist system and U.S. imperialism were ultimately responsible for the destruction of the national economies south of the Rio Bravo that fueled the forced migration to Northern Mexico and into the United States.

This is what Al wrote in 2018 in support of Labor and Community for an Independent Party (LCIP), of which he was a Continuations Committee member:

“The Democratic Party is a full accomplice in the attacks on immigrant workers and their families, as it (1) authored and promoted the NAFTA and CAFTA trade agreements, which deepened the poverty in Mexico and Central America, forcing millions to flee their lands and communities, and (2) it promoted the militarization of the U.S. border and the mass deportation of immigrants from Mexico and Central America. The Democratic Party majority voted to allocate $4.6 billion for ‘border security,’ including huge sums going to for-profit prisons and detention centers.

Al was a close friend of Socialist Organizer and The Organizer newspaper. He received monthly bundles of our newspaper, which he distributed to activists in Sacramento, and he was a regular supporter of our fund drives and international campaigns. He was a comrade and a brother.

Socialist Organizer extends our most profound condolences to Desirèe Rojas, Fatima Garcia, Shalom Rojas and the rest of Al’s family. All of us are at your side in this moment of grief; we, too, feel keenly the loss of a pillar of our movement.

We will honor his memory by redoubling our efforts to support the farmworkers in San Quintin, and to fight for the legalization of all undocumented immigrants in the United States, the repeal of NAFTA 2.0 and the shameful “Immigration Pact” — and for a Labor Party based on the trade unions and oppressed communities.

A tribute to Al Rojas

The Sacramento community has lost Al Rojas, who passed away Saturday, March 20, 2021 in Sacramento. He came from the fields of the valley and now he has returned to these spaces in spirit.

We honor him by following his example in living a committed life. He was a leader of union democracy, a fighter for farmworkers, and all workers, an internationalist who understood that the political destiny of Mexico and the United States were linked and inseparable. As he saw, both countries are under the domination of transnational corporations concerned only with cheap labor and high profits.

Al could be soft-spoken, his voice could be gentle. But there was no mistaking the fury of his love for farmworkers as the most exploited and oppressed members of the working class and the energy he brought to the struggle against injustice whenever and wherever he found it. Or his contempt for those who, through hypocrisy and self-dealing, betrayed the workers and their unions.

It’s well known that he co-founded the UFW and dedicated decades of his life to organizing the union and the grape boycott. It’s well known that he stood against the UFW in later years as a result of its failure to maintain union democracy and its failure to represent the interests of its members. He served as president, and in other official roles, of the AFL-CIO’s Northern California Chapter of the Labor Council for Latin American Advancement (LCLAA). He fought to expose the North American Free Trade Agreement (NAFTA), the cause of the forced migration and separation of millions of undocumented workers families.  He never stopped fighting for the rights of migrant and indigenous people – don’t call them immigrants, he would say – victimized and imprisoned by ICE and stripped of their human rights by US law.

He brought the Driscoll Berry Boycott to Sacramento, exposing the Driscoll corporation over the environmental degradation, inhuman working conditions and daily wages of $10 or less in the San Quentin valley in Baja California.

This brief description cannot do justice to the magnitude of Al Rojas’ historic contribution to the movements of our time. But there are the little things that show his heart. In 2008, Maria Isabel Vasquez Jimenez, a teen age farmworker, died because of extreme heat in the fields. It was Al Rojas who stepped forward to expose the criminal political complicity that led to her death. In 2009 Luis Gutierrez was killed in cold blood by the Woodland Police.  It was Al Rojas who gathered supporters together, four years after his death, for a candle light vigil on the lonely roadside where Luis was shot down.

Al Rojas will be missed. The deepest condolences are offered to his family.

Late last month, the Labor Council for Latin American Advancement (LCLAA) family lost one of its most revered leaders. LCLAA and the labor movement will deeply miss Al Rojas, LCLAA’s Sacramento Chapter vice president and SEIU Local 1000 member, who died on Saturday, March 20, at the age of 84.

A farmworker who spent most of his life in the fields of San Joaquin Valley, Rojas was a fighter for decades. In 1963, he joined César Chávez and other prominent leaders in forming the United Farm Workers (UFW). He then became a tireless leader who led strikes throughout California and stood in defense of immigrant working families. The AFL-CIO joins LCLAA, the Rojas family and the scores of workers who are grateful to our brother for the unending fight he championed.

Stop NAFTA 2.0 – Legalization for All Undocumented Immigrants! Labor Rights for All!

[The following article was submitted by Al Rojas to the discussion at the Binational Conference Against NAFTA 2.0, the Wall of Shame and Deportations, held in Carson, Calif. in December 2017.]

My family and many others spent well over 25 years organizing and eventually founding the United Farm Workers Independent Union, International Brotherhood of Teamsters, based in San Jose, Calif. Led by Oscar Gonzalez, from 1961 to 1983, we were able to organize committees throughout California, specifically in the coastal areas from Northern California down to the Mexican border.

It was during that time, in 1966, that the UFW, IBT merged with the National Farm Workers association led by César E. Chávez and others and the Agricultural Workers Organizing Committee, AFL-CIO, thereafter becoming the United Farm Workers of America (UFW).

Having worked alongside “braceros” in the vegetable industry in Oxnard, Calif., in the early 1960s, I was able to understand the issues involved in foreign contract labor then embodied in the Bracero Program.* At that time people like the Hon. Dr. Ernesto Galarza, César E. Chávez, Gilbert Padilla, John Soria and others opposed this inhumane system of indentured servitude, which did not allow workers protections, the right to decent wages, or the right to decide whether to have a union of their choosing represent their interests.

Although the Bracero Program was abolished through the efforts of Galarza, Chávez, Padilla and others, it has now resurfaced as the “guest worker” program.

Turning its back on its proud history, UFW President Arturo Rodriguez came out in support of proposed federal legislation called Ag-Jobs. In essence, Ag-Jobs would allow the recruitment of foreign workers from countries like Mexico, Thailand and Vietnam to labor in U.S. fields as “guest workers.”

In coming out in support of Ag-Jobs, ironically the UFW is taking on a contradictory role, being a union in defense of farm workers’ rights and now acting as agents in the recruitment of foreign agricultural workers for the U.S. corporate agri-business-industry.

The need for an overhaul of our immigration laws is not in question here. The issue is that at a time when unemployment is estimated at between 18 percent and 21 percent in California’s Central Valley and there are over 11 million undocumented immigrants already in the U.S., it is a complete farce to mislead the public by promoting and pushing for importing cheap foreign labor through a guest-worker (Ag-Jobs) program.

What we need are decent wages and working conditions and humane immigration reform.

The real issue is organizing and representing workers and the workers’ right to negotiate a union contract. The real issue is legalization for all immigrants who are here to work because their home economies are being devastated by free trade agreements like NAFTA and CAFTA.

The real issue is the millions of U.S. workers who are unemployed and struggling to feed their families, while the White House and Congress bail out Wall Street to the tune of billions of dollars.

I, and others, believe that the UFW needs to concentrate on organizing and representing workers. The real issue is decent wages, benefits, safety protections, and the right to unionize, NOT more guest-worker programs that exploit workers who are not free to unionize and who are completely in the hands of the employer, who is free to hire and fire at will.

If agricultural growers paid a decent wage, U.S. workers would apply for those jobs and there would be no need for guest workers.

*Note: The Bracero Program was a series of laws and diplomatic agreements, initiated on August 4, 1942, when the United States and Mexico signed the Mexican Farm Labor Agreement. It was terminated in 1964. Mexican workers were promised 30 cents an hour, but part of their wages were to be put into a private savings account in Mexico. To this day, an estimated US$95 million in promised wages were never paid to the bracero farmworkers or their families.