The Peace and Freedom Party stands with the slogan "Tax the rich and their corporations." As socialists we want society as a whole to cooperatively own and manage industry, resources, and financial institutions. But as we point out in our article "Why Socialists Say 'Tax the Rich...'", we support efforts to increase taxes on the corporations and the wealthy to provide the services that people need now.

The California Budget and Policy Center has a new article on how the State of California has given corporations increasing tax breaks over the last few years entitled “Corporations Pay Far Less of Their California Income in State Taxes Than a Generation Ago – Even Amid COVID-19”, which is reprinted below.

This trend is particularly egregious in the face of the pending budget shortfall and huge cuts to social services proposed by the Governor. We need to access the wealth that working people create to provide for our needs instead of lining the pockets of the rich. We can start by working to pass the split roll property tax initiative that will be on the Nov. 3, 2020 ballot. 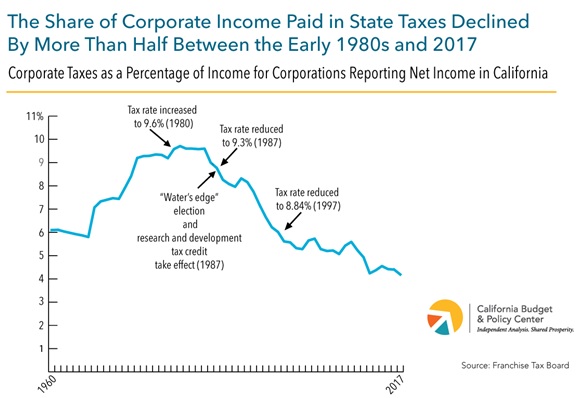 In addition to cutting tax rates since the 1980s, state policymakers have enacted several corporate tax breaks that reduce the share of income that corporations pay in California corporation taxes. For example, beginning in 1987, California allowed multinational corporations to lower their tax liability by calculating their California income based on either their total income from worldwide operations or only from their operations within the US. This so-called “water’s edge” election will cost the state an estimated $2.4 billion in 2019-20. Also in 1987, state policymakers established the state’s research and development (R&D) tax credit, which primarily benefits large corporations and will cost the state an estimated $1.8 billion in 2019-20.

As with many corporate income tax credits, the amount spent on the R&D credit each year is unlimited, and there is no expiration date. In total, California is projected to spend $5.7 billion on tax expenditures for corporations in 2019-20.

Corporations can contribute more not only because they are paying less than half the amount in state taxes than they did three decades ago, but also because they are likely to pay far less of their income in federal taxes due to the federal Tax Cuts and Jobs Act (TCJA), signed by President Trump in 2017. The TCJA made several changes to federal tax law that benefit corporations, including slashing the federal corporate income tax rate from 35% to 21%, the largest one-time reduction in US history.

The Institute for Taxation and Economic Policy (ITEP) estimated that the tax benefit to California corporate business owners was more than $13 billion in 2018. The reduction in federal corporate taxes may argue for an increase in the state’s corporate income tax rate. However, policymakers have other options for ensuring that corporations pay their fair share in state taxes. For example, they could review existing corporate tax provisions, such as corporate tax credits, exemptions, and deductions, and reduce or eliminate those that are not achieving the state’s policy goals.

By reducing spending on corporate tax breaks, the state would have more resources available to support families with low incomes who are struggling to afford the costs of living in California, COVID-19 crisis or not.